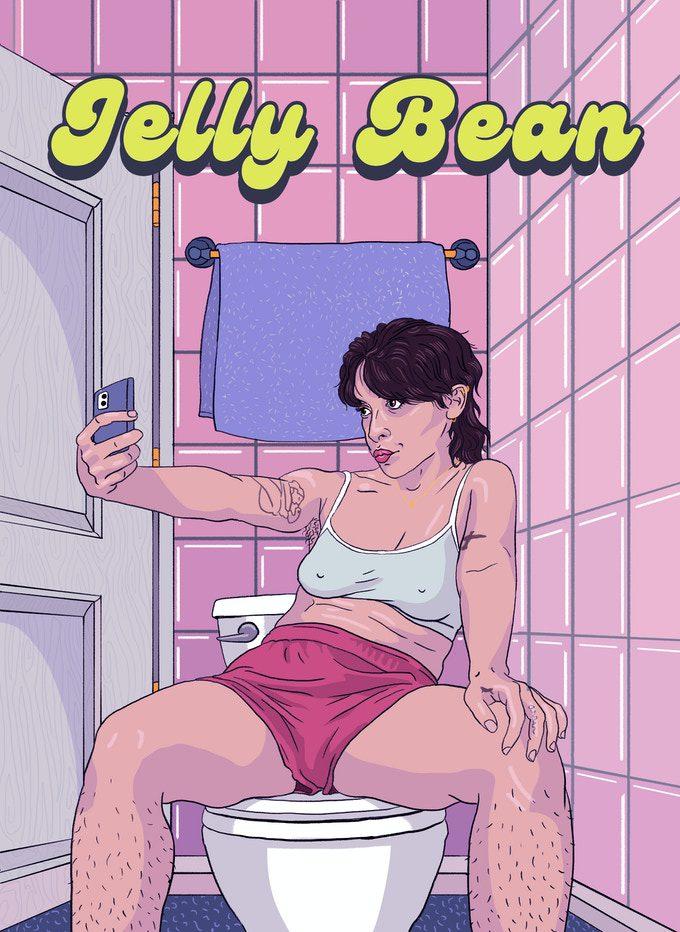 Follow the trials and triumphs of a pivotal day in Reyzl’s dating misadventures as she sets out to find the intimacy she craves.

Jelly Bean is a portrait of Reyzl, a queer woman who is earnestly seeking romance on dating apps that she can not hack. Lacking any strategy to vet a perfect match, Reyzl decides to date whoever the algorithms choose. Catastrophe ensues when Reyzl’s first online date turns out to be an appalling disappointment. When an unexpected opportunity for intimacy presents itself a second time, will Reyzl have the courage to open herself up and grasp it?

Bring back rom-coms… but make them gay!

Jelly Bean is a voyeuristic satire of contemporary dating based on my misadventures searching for partnership online. The film’s aesthetic is a callback to dark comedies made in the ’90s, like Muriel’s Wedding and Welcome to the Dollhouse, that tell stories of ostracized women who long for love. Flamboyant outsiders portrayed by filmmakers like Miranda July, Todd Solondz and Jane Campion, are the characters I fall in love with. The friction between the alienation these women experience and the colorful crass worlds they inhabit touches me so deeply, it tickles me. Jelly Bean emulates this contrast, reflecting the bizarre aspects and brutal truths of online dating as a queer woman, using romantic comedy tropes.

I began to write autobiographically about my search for love as a queer, Jewish woman, and ultimately, the narrative became a kind of spell, a conjuring of partnership.  In writing this script, I discovered my deep desires. I specified my definition of romance. Jelly Bean’s central character Reyzl, realizes her happy ending when she meets someone who naturally gravitates to her idiosyncrasies. I wanted her to discover, as I did, that our desires and needs are complex and nuanced, deserving of attentive curiosity. Romance is a careful odyssey of discovery of the other. I want to tell a love story in which two people find a mutual attraction, not because either of them fits into a conventional box, but because they share a unique and specific flavor of weird.

“An honorable human relationship… is a process, delicate, violent, often terrifying to both persons involved, a process of refining the truths they can tell each other.

It is important to do this because it breaks down human self-delusion and isolation.

It is important to do this because in doing so we do justice to our own complexity.»

Jelly Bean is currently in post-production!

The funds contributed to this campaign will make it possible for us to finish the film, submit it to festivals and open future opportunities to develop and produce a feature. Your pledges will help us cross the finish line by May 2022. THANK YOU!

Any funding beyond our $10,000 goal will go towards reimbursement for the cost of production, making it possible for Nessa to develop a feature film.

This production prioritizes hiring female and LGBTQ+ artists. The majority of the cast and crew are part of a resilient community of Brooklyn-based artists.

For the past five years, I have dedicated myself to independent filmmaking, building on fifteen years of theatrical production. Jelly Bean is the first film project in which I integrate all of my creative practices as a writer, director, and actor. I will use the short film as proof of concept for my approach to storytelling. With your support, I will be able to share this completed work with new audiences and industry professionals, a crucial step in securing the opportunity to develop this work into a feature film! Your contribution goes beyond this project, it is an investment in the work that is to come.

Below you will find my recent projects. To view more of my work, please visit my website.

April, 2021 – Responding to the COVID-19 pandemic, The Ark is a hybrid documentary short that weaves together experimental video diaries and lyrical performance to reflect on longing, loss, and the ways we cope with isolation. This collection of video diaries assembles works of professional and novice artists in response to Shared Process, a series of filmmaking prompts generated between April-June 2020. Through these intimate portraits and the filmmakers’ poetic engagement with the myth of The Great Flood, the film examines the magnitude of our collective grief and asks “On the other side of this, who will we become?”Screenings: Brooklyn Women’s Film Festival; Chain NYC Film Festival (Winner: Best Quarantine Short)

November 2020 – A comedic musical short in which Ruth Bader Ginsberg and Melania Trump ally themselves in pursuit of joy. When a lonely Melania Trump prays to the Bethesda Fountain for a friend, she unexpectedly conjures the ghost of RBG. After smoothing out their differences, they join forces to sing the iconic musical duet “Get Happy”, originally performed by Judy Garland and Barbara Streisand. Make Happy was viewed over 12,000 times in the 4 days after its online release.

With special thanks to:

Past, present and future ancestors who contribute to the bold legacy of queer and feminist cinema

And to all the supporters of this campaign!