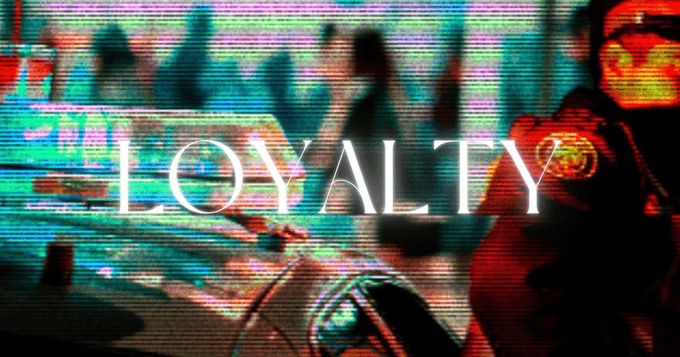 Loyalty is a crime/drama focusing on the work/home life of Jason, a middle aged Police Detective who works for the local station. He is currently working on a case with his partner Marie.

The film begins at home with Jason and his son Cameron where we see their relationship dynamic. Cameron leaves for school and then Jason heads to work. When Jason arrives Marie has some more CCTV footage to show him which gives them further information on their suspect. They are drawing closer to nailing a suspect.   Later we see Marie and Jason have a conversation about the struggles of juggling work and home life. Marie is parent just like Jason and the two often connect over their children.

After a long day Jason returns home to find Cameron cooking and again we see their relationship.  Cameron leaves his dad to eat and work when Marie calls, they’ve got a tip about where the next attack will be.  Jason and Marie arrive in the area. They hear screaming and follow the sound round the corner to see a group of teenagers. The seemingly ring-leader of the group yells “Split!” and the group splits. Jason goes after him but this teenager is too quick. As Jason reaches out to grab him, he gets the back of his coat, the  teenager shakes off his jacket and sprints away.

We are set to film in Guilford April 8th-10 and the money raised over the next 5 weeks will be used to pay our actors, and go towards the cost of hiring equipment.

Anya studied screenwriting both in England and America and has won awards at multiple festivals for both writing and directing the comedy short ‘Tongue-tied’. Alongside writing, Anya also works as a script supervisor, working closely with reputable directors such as Daniel Zirilli and Henk Pretorius. She is currently directing her own documentary on exorcisms in Britain, and has two other original scripts going into production.

“I am very excited to work with Benjamin on Loyalty and to see my words adapted to screen. I trust him with my words and  know that he and the team are going to create a gripping film.”

Benjamin has over 2 years experience as a camera operator and has produced everything from music videos, corporate and Fitness videos for a range of clients. He is now ready to take on a new challenge as a film Director, Loyalty is his Directorial debut.  As a filmmaker / director, his ambition is to create stories that makes the audience ask questions and reflect on their own life.

“Being behind the camera has taught me so much, now is my chance to focus on Directing. The idea of Loyalty came to me after watch Dark Knight, funnily enough. The way in which the ambience of the film held my attention and had me on the edge of me seat waiting to see what happens; I came away thinking that’s it, that the feeling I want my audience to feel. With my amazing team, I know we can achieve this!” – Benjamin

Rhiannon initially trained in Musical Theatre, followed by Acting training in Los Angeles.Throughout her time as a performer she has starred in a number of plays and shorts and most recently was a featured artist for a British Gas advert. Upon graduation Rhiannon began producing her own shorts. Most recently she produced a short film which of she wrote. Rhiannon is passionate about storytelling regardless the medium, she is meticulous, creative and patient.

” After reading the script I jumped at the chance to produce Loyalty. I have always loved watching crime-dramas, especially Broadchurch.I am so excited to finally be producing a crime/drama!  And being able to work on this with a phenomenal  team, I couldn’t ask for more.” – Rhiannon

Nahal has been working in the industry since she was 19 years old, as both an actor and production assistant/ producer and runner. She can be found as featured artist in commercials and campaigns worldwide. Nahal is currently in her 2nd year at the University of the Arts London, studying as an actor.  Alongside being on sets and stages Nahal has worked as an assistant manager at the Pauline Quirke academy, been an assistant as MUA&H and set designer. She is so delighted to be working on this project, being able to bring her abundance of experience to set.

“I am looking forward to working on this project, I’ve never worked on a crime/drama before.  The team is so collaborative and everyone is so creative and passionate, I know Loyalty is going to great. I can’t wait to get going!” – Nahal

Max is a French Cinematographer who is experienced in both camera and lighting having worked for the likes of Disney and Netflix.  While Max takes influence from his French heritage he is eager to find his own personal style to serve the story the way they deserve. Although young, Max is deemed by most he meets as a rising DP star.

“I am excited to about the project, to be able to dive into the relationship between a single working father and his son. For me the father/son relationship is so tender, it’s often build on guidance and trust. To be able to explore and capture this is going to be very special.” – Max

Azize  recently graduated with a First Class BA in Practical Filmmaking, while studying she had the privilege to work on a number of professional sets as a 1st AD and Producer. Zize has worked on a few features and a wide selection of short films; many of which have won festivals. She is fantastic at organisation and nothing makes her heart beat faster than a spread sheet and she is the master at time keeping. She is very excited to be working on Loyalty!

” I grew up without a TV, but was always been fascinated by motion picture. That, combined with my love of organising, Assistant Director seemed perfect. I can’t wait to see this story brought  to life.” – Azize

We are fundraising over the next 30days to cover the cost of:

Feed the cast and crew; It’s a three day shoot and a team of 17 starving humans.

Hiring equipment: To make this looks amazing we need great equipment, simple as.