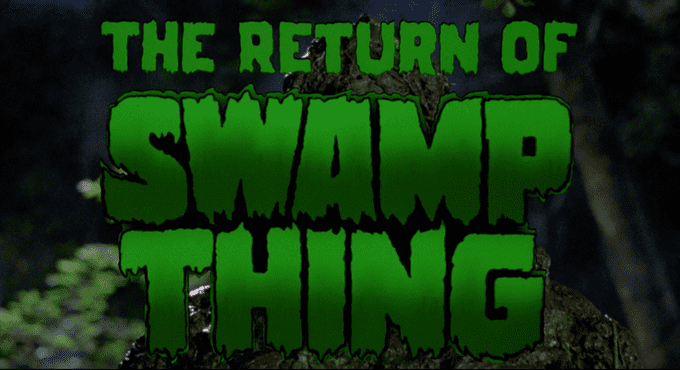 RiffTrax Live 2022: The Return of Swamp Thing – and MORE!

RiffTrax is performing a riff of THE RETURN OF SWAMP THING Live from Nashville in 2022 and simulcast to 600+ movie theaters nationwide!

This time, in embarking upon our twelfth year of RiffTrax Live, we’ve selected a wonderfully cheesy movie based on the DC Comics superhero: THE RETURN OF SWAMP THING! It stars Dick Durock (Swamp Thing), Heather Locklear (in her only Razzie-winning performance), and Louis Jourdan (Year of the Comet), and was directed by Jim Wynorski (Deathstalker II, Chopping Mall) — which means it’s perfect for RiffTrax Live! We’ll also kick the night off with a vintage short film (which may or may not be swamp-related).

If this campaign is successful, we’ll broadcast the ensuing hilarity to 600+ movie theaters across America on August 18th thanks to our friends at Fathom Events.

To fund this year’s RiffTrax Live show, we need your help once more! The up-front cost to pull off a live event like this is simply beyond doing on our own, but with a little help from our fans, we can make it happen. In exchange, we’ve come up with some exciting rewards just for our backers, including digital downloads of the live show, an exclusive Kickstarter 2022 shirt (the design of which will be revealed in a future update), autographed posters, VIP experiences, and more! Keep scrolling for highlights.

And hey, everyone loves exclusives! If you’re a subscriber to our Patreon when this campaign ends, and you back it at the $50 reward level or higher, you’ll also receive an EXCLUSIVE bonus reward: a super-collectible challenge coin featuring the longtime voice of our Perfect Sync Technology, DisembAudio!

We also have some special shorts-related happenings in store, as part of Kickstarter’s “Long Story Short” event that goes all March long.

So, friends – please join us once again and help us make another year of hilarious RiffTrax Live adventures possible with THE RETURN OF SWAMP THING on August 18th, broadcast to hundreds of movie screens around the U.S.A.

What is RiffTrax Live?

It’s a theatrical comedy experience that’s best enjoyed with friends! Mike, Kevin, and Bill perform their funny commentary (we call it “riffing”) on a movie being played on screen in front of a live audience, and we beam the resulting comedy via satellite to cinemas across the nation in a big one-night LIVE Fathom Event.

RiffTrax fans, MSTies, and comedy lovers alike throughout the U.S. will meet up in theaters to enjoy the show, live on the big screen. (Did we mention it’s live?)

The guys at RiffTrax.com have been providing hilarious movie commentary for years – first as writers and stars of the cult TV comedy show MYSTERY SCIENCE THEATER 3000, and then online since 2006 as RIFFTRAX.

Michael J. Nelson, Kevin Murphy and Bill Corbett have taken on movies both classic and not-so-classic: from the blockbuster READY PLAYER ONE to the renowned classic CASABLANCA, as well as cinematic misfires like STAR GAMES and A TALKING CAT!?! — with one mission: to make them funny!

We’ve produced comedic riffs for over 800 movies and shorts that range from major Hollywood blockbusters, to obscure B-movies and goofy educational short films. We’ve even been on TV on the National Geographic Channel, riffing zany animal reality shows. You can enjoy these on our website as well as Pluto TV, Twitch, Amazon, Tubi, Samsung TVPlus and more! And that’s not all – we have an amazing RiffTrax app that AUTOMATICALLY syncs our jokes to the biggest blockbuster movies like STAR WARS, HARRY POTTER, and TWILIGHT, as well as a new Friends subscription service that you can enjoy on your Roku or FireTV device!

Why we’re on Kickstarter

Way back in 2009, we decided to try an experiment: a live riffing of the Ed Wood classic PLAN 9 FROM OUTER SPACE. We filmed the show in front of a huge audience at the Belcourt Theater in Nashville, and simulcast the whole event via satellite, LIVE, to 500 movie theaters around the U.S.A.

It was a great success, and RiffTrax Live was born! Since then, we’ve done over 30 more live simulcast shows over the past decade and counting, including cult classics like SAMURAI COP, “MANOS” THE HANDS OF FATE, the “slrpnl”-pushing D-movie BIRDEMIC; the bug-infested classic STARSHIP TROOPERS; the SyFy sensation SHARKNADO; an MST3K CAST REUNION SHOW, and a whole bunch more, almost all of which were only made possible thanks to our generous Kickstarter backers.

Movie licensing on its own costs a heroic chunk of change, and in addition to that, the cost for producing these Live Shows is prohibitively high. So, to have this wacky idea make any economic sense, we really do need your help. We have our deal with Fathom Events locked in, the August 18 date is reserved for the Live Show, and we have an incredibly fun, cheesy movie ready to be riffed for a great night of hilarious entertainment – the rest is up to you!

Tons of great stuff! For starters, backers at every level get first dibs on tickets to see this Live Show in person. We’ll do that by sending out backer-only updates that include an advance ticketing window and a secret purchasing link, that allows you to snag your Belcourt tickets a full day before they’re available to the general public. That’s an EXCLUSIVE advance purchasing window just for backing the campaign at any level!

We’ve also put our heads together to come up with awesome exclusives at every reward level, such as a digital download of the Live Show, never-before-seen shorts, songs written and recorded by the guys, and even several physical rewards like an exclusive backer shirt, a DVD of the show, and more! Here are some highlights:

Back this project at the $100 level or higher and you’ll receive an EXCLUSIVE backer-only shirt!

This year’s exclusive shirt will be designed by Jennifer Albright, who also did the iconic poster artwork for our Double Dragon, San Franpsycho, and Father Frostreleases! Check her work out below:

We’ll include garment options and sizing information when the campaign is over and surveys are sent out to backers.

At the $225 level and higher, backers will also receive an autographed poster celebrating this Fathom Events live show! Hand-signed in sharpie by the riffers, this reward is highly collectible and perfect for framing.

We’ll post the final design in a future Update!

For $575, our own Mike Nelson will draw you one of his famous Underpants Guys!

It’s probably our silliest reward, as well as insight into the way Mike Nelson’s brain works – he’s always left these strange “underpants guy” drawings on office whiteboards, rehearsal scripts, and almost any other surface that could be written on. Now you can have one of your very own! Just back us at the $575 level and you’ll receive a hand-drawn Underpants Guy along with everything from the Your Face On Screen level.

Get the ultimate RiffTrax Live experience with a VIP package ($1,975)

As we’ve done for previous live events, we’re also offering a fantastic VIP package for you and a guest that includes meeting the riffers and RiffTrax crew in Nashville, two tickets for the best seats in the house, getting your picture in the credits, and a bag full of exclusive RiffTrax swag.

Check out the list of rewards and their corresponding tiers to see all the various goodies that are up for grabs.

Unfortunately, while we can’t give away tickets to the shows at individual movie theaters with the rewards, we can give you an HD digital download of the Live Show! That’s in addition to all the other exclusive rewards created just for backers, like special behind-the-scenes videos, never-before-seen shorts, digital downloads of live show scripts, and more!

All that, plus the priceless warm fuzzy feeling of knowing YOU helped make another year of RiffTrax on the Big Screen possible.

Become a TRAXIAN and get a BONUS reward!

Patreon is the subscription platform for creators, and the only place you can get behind-the-scenes RiffTrax stuff all year round! We’ve already created a whole slew of content available only to our subscribers, who we call Traxians—and we have an EXCLUSIVE bonus reward just for them! (Check out some free public posts here to get an idea of the fun stuff we’re creating for our subscribers.)

DisembAudio finally gets his time in the coin-shaped spotlight! We’ll cast this coin in an antique bronze finish. And the inscription is a loose translation of our slogan, “We don’t make movies; we make fun of them”:

Traxian subscribers who back this campaign at $50 and higher will receive this super-exclusive, highly collectible DisembAudio challenge coin as a free add-on to their reward tier. It will be 1.5″ in diameter, struck in metal, with soft enamel insets on one side, and Dis himself in 3D on the other!

This reward will NOT be available anywhere else after the Kickstarter ends, and will be ONLY for backers at the $50 level and above who are also active Patrons at the exact moment this Kickstarter campaign closes. That’s on top of all the exclusive, behind-the-scenes extras and sneak peeks we’ll be posting for Traxians during the Live Show pre-production process.

Here’s how it will work:

1. Become a Traxian at any level.

3. When this campaign ends, we’ll take a snapshot of our active Patrons.

4. When surveys are sent out, we’ll ask for your Patreon email address. This will let us “link” your Patreon information with your Kickstarter pledge.

5. Before surveys are locked down, we’ll add your coin automatically to your survey. (If you were originally due to receive digital-only rewards, we’ll let you know when you need to update your survey with a physical items shipping address.)

What if we get extra money, past our goal?

We’ve been extremely fortunate in surpassing our goals in our previous Kickstarter campaigns. And just like with those projects, any extra funds we raise in this campaign will go towards adding additional theaters, the top-notch production of the shows, and to create all those awesome rewards!

Making these shows and rewards happen actually costs much more than our base goal. That’s just the reality of it. If we’re able to raise extra money, those additional funds go right back into putting on the best production we can.

All that being said…

Thank you, won’t you?

We really, truly have the best fans on the planet, and we know how incredibly lucky we are. In fact, RiffTrax wouldn’t still be here after 16 years without our incredible fans, and we sincerely thank you for your generous support for so many years. We can’t wait to make you laugh even more during 2022 – so please join us and help make RiffTrax Live: THE RETURN OF SWAMP THING a reality!

Next articleJelly Bean | a queer romantic comedy set in Brooklyn