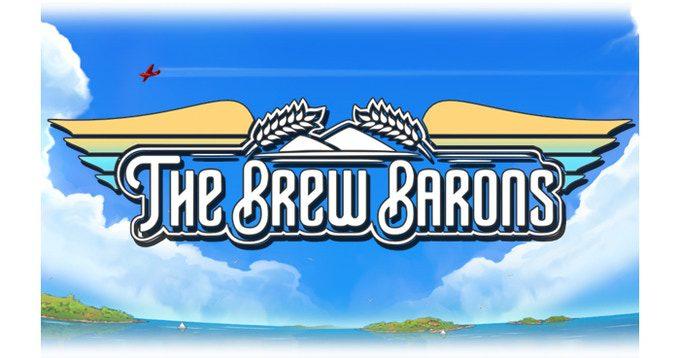 A tranquil world becomes ever more corrupt by the day, spoiled by a  strong-armed pirate organization that forcefully impose their brewing monopoly over the lands. Armed with your own brewery and seaplane, it’s up to you to explore, forage, craft, sell and deliver your handcrafted brews with aid from fellow pilots who’ve joined your cause to overthrow the corrupt pirate organization and restore peace and balance to the island communities.

Based in a 1930s Mediterranean setting, the visuals of the world and seaplane theme take inspiration from the beloved Studio Ghibli film Porco Rosso shown below.

Taking from the film, our goal was to deliver a beautiful world and pair that with unique gameplay that wasn’t predominantly based on aggression and combat as most flight games do. We’ve set out to build a charming environment that evokes a sense of freedom and tranquility, contrasted with an underlying seedy Pirate organization that will get in your way.

The Brew Barons gameplay mixes Arcade Flight, RPG and Light Business Management genres together, producing a truly one of a kind unique experience.

Arcade Flight : Explore a boundless open world in your seaplane with casual mouse aim controls or manual flight controls, as you uncover fellow bar owners wishing to buy your brews, rival brew pirates trying to stop you, people in need of your help and locations to explore amid your search for brewing ingredients throughout the world. Enjoy reactionary physics driven buoyancy and aerofoils, along with volumetric clouds and dynamics ocean water.

RPG : Collect plane parts to assemble your seaplane, along with new pilots to join you whom each have their own set of positive/negative traits. Pilots tire from long flights or the frigid cold at high altitudes and will require periodic rests. They also possess different stats and preferences, so best pair your plane, pilot and co-pilot wisely!  We’ve also planned on each pilot having their own tale that unveils through game progression.

Light Business Management: Handcraft brews from an assortment of ingredients gathered while exploring and customize your bottle design. Stock your own customized bar with your brews to increase your reputation. Orders from other bars located all over the world will eventually desire your product to which you can air deliver for a price. Of the pilots that aren’t actively flying, can be given brewery or bartender jobs to increase your output. By developing your brands, earning establishment fame and delivering your product, only then will have a chance of toppling the pirate organization.

The Pirates are an organized gang comprised of mostly buffoons and thugs.They seek to maintain their seedy monopoly over alcohol brewing, distribution and sales throughout all the islands. They’re opportunistic criminals, often steal ingredient from trade vessels or extorting ingredients from local farmers. Despite possessing fleets of armored planes and boats, they’re wise enough not to over encroach their power upon the communities and local authorities, for a war would jeopardize the stability of their empire sustaining brew operations. Knowing their bounds, pirates often resort to intimidation tactics over violence unless challenged.

Reoccurring pirate characters will appear throughout the game and engage the player in battle. As the player progresses and further disrupts the pirates brewing monopoly, they too will progress in rolling out greater planes, boats and even surface to air submarines to deal with the pesky player.

The player will be able to craft their plane from a selection of parts that offer different performance, characteristics or abilities. Craft builds that offer a balanced experience or one that excel in particular roles such as Delivery, Combat or Ingredient collection. Parts will also have synergistic outcomes so pair your parts wisely.

Planes will come in two base archetypes, light pontoon planes shown above or heavy flying boats. Light planes will be an ideal choice for combat, exploration and quick errands. Whereas the heavy flying boat will excel at making large deliveries and in some instances collection.

As in most RPGs you can expect the player to encounter quests throughout their travels and errands. You’ll meet fellow pilots challenging you to a race, distraught calls from a burning ship and others seeking assistance in their daily life to name a few. You’ll also encounter unique bar owners and patrons throughout your journey that might not only be looking your help, but may also offer their assistance.

Expect a number of small optional mini-games such as a camera snap-shooting aerial Tourism mini-game or underwater wreck salvaging in which you salvage money and items from sunken wrecks. We desire to add Wii Sports Resort style mini-games and time trails with sufficient Kickstarter backings.

Not only would you be supporting a truly unique game that pays homage to Porco Rosso, you will also be supporting a brand new studio that dislikes purchasable loot boxes, DRM and nickel & dime micro transactions. We feel that full priced day 1 releases shouldn’t come with purchasable DLC and that DLC be reasonably priced and contain far more than simple reskins. We have no interests in exploitative or cheap products that we sometimes see within our industry.

We’re super appreciative of any and all backers helping to making this game a reality! More goals met means we can build more and deliver an even better experience! Please note, more met goals may also require more development time spanning into 2023.

Logos are sandblast carved into the glass to produce a etched 3D result. Alcoholic beverage not included. Glassware will be packaged with tried and true methods by the glass manufactures with over 20yrs experience of glass shipping experience. Recommend hand washing.  In the unlikely event that your glassware is broken upon arrival, please send us a few photos of the broken glassware and parcel packaging for confirmation to lifetapstudios @ gmail.com and we can organize a replacement.

We also have a (Design a NPC) reward or (Design a Plane) reward listed at the bottom of the rewards section.