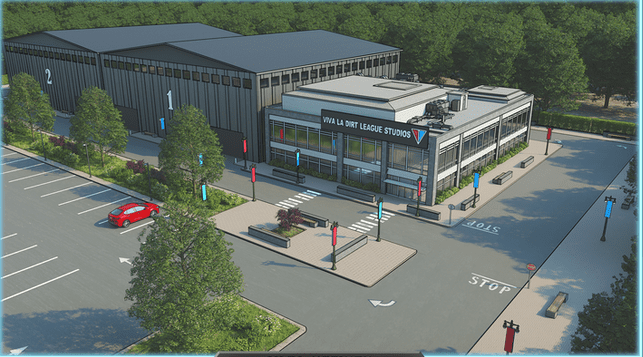 Viva La Dirt League used to be just 3 guys, clowning around with a crappy camera, and some cheap costumes and props. My how times have changed! Viva’s grown faster than we ever could have imagined and frankly, we’re struggling to keep up! Our dream has always been to bring you bigger and better content, but for that to happen we need to upgrade. It’s time to expaaaaand baby!

The Great Expansion is about bringing the entire VLDL family together and streamlining the production process to bring you new epic content. The foundation of this is building our first ever studio, complete with a modern new office space and a host of awesome sets. For the first time, this will give Viva La Dirt League a home.

Yes, that might sound strange, but Viva is kind of homeless. We need a friggin studio!  Honestly, dealing with locations, weather and bad sound is a nightmare and it’s one of the biggest hurdles we deal with on a daily basis. Having a dedicated space to film in would be an absolute game changer.

PLEASE NOTE: These are artistic representations of our dream studio. Final studio subject to available budget.

We want you to feel just as much a part of this next chapter as we do! As such, the majority of the rewards are focused around staying up to date with the progress of the build, being part of the new studio and the shows themselves.

We’ve set it up this way to make sure most of the funds go towards the upgrade, but we want the rewards to reflect the amazing community that will have helped us achieve this mammoth accomplishment.

PLEASE NOTE: Shipping is not included in the pledge price. Estimated shipping prices are listed at the bottom of the page.

We have very ambitious plans for the studio, sets and new shows, and if money wasn’t an issue the sky’s the limit in terms of what we’d create. However we understand we need a plan of  achievable goals that sets a solid foundation while building towards bigger ideas and upgrades.

We’ve also turned the stretch goals on this campaign into a bit of a game! Lets see how many levels we can get through!

The rest of the levels will be revealed as we get to each one… can you guess what some of them are from the silhouettes? Tehehehe

In the post campaign, all the Kickstarter backers will get the opportunity to get their hands on some EXCLUSIVE Kickstarter add on items that no one else will be able to get. So if you want to get your hands on any of these goodies — get donating!

Wow — hi — you’ve already read quite far down this Kickstarter. There are a LOT of words so, go you! You must be the kind of person who wants ALL the information about the studio,  sets, office, upgraded shows and new shows. So here it is!

Want it in a nice video format? Check out the guys’ handy video here:

Our current shows will get a big ol’ makeover with dedicated sets for each series! This means all the current shows are gonna look and sound way better. The production value’s about to explode! Check it out below.

The real Playtech store has been an amazing partner of Viva La Dirt League. However filming in a real and operational store comes with large challenges;

As such we have made the big boy decision to move out and make a set of our own. This way we can lean into some bigger scale episodes with a more dynamic space to act and create in. We can finally make some crazier, bigger ideas we’ve been unable to film in a real store location… Karen Part 3 anyone…?

While few countries compare to New Zealand’s natural beauty, unfortunately Europeans didn’t settle NZ back when building castles was still cool. As such we are frustratingly devoid of castles / lairs / ruins or dungeons which would be GREAT locations for NPC Man (also sets for Souls Logic and D&D Logic).

If we achieve our 3rd stretch goal we will be able to create our own moveable castle / cave sets that we can mix and match to make it look like a variety of different interiors for all our shows.

We wanna give D&D the love it deserves! We’re going to double down and finally build our own cozy tavern set! Designing a larger and more functional table, and having it as a permanent place to film.

You’ve been crying out for more, longer D&D content and this is how that happens. We’ll also be starting an entirely new campaign set in the world of Azerim featuring an all-female VLDL cast.

With a new studio, we’ll finally have the space to create some amazing new shows we’ve been eager to make for a long time. We’ve already got a lot of plans for new shows, including;

DEV is a completely new show about the inner workings of the game company that makes Skycraft (The fictional game from Epic NPC Man). An office-inspired series about the stupid, egotistical, mismanaged morons that somehow managed to make an incredibly successful MMORPG.

It’s kinda crazy that we’ve never done a simulation logic series. Life Simulation games like The Sims, Animal Crossing and Stardew Valley are some of the most popular video games of all time. This new show explores the in’s and out’s of the absolutely insane world logic within them.

In simulation games, customization of your house/land/farm is key to the gaming experience. The option of a studio to cater to skits that need the ability to move walls, set fires, and portray the crazy world of simulation logic. The studio will free us up to really embrace the ridiculous logic of this genre

How can you POOOORTAL AWAY without a greenscreen?! Visual effects are becoming such an important part of VLDL shows and a massive part of that is using a greenscreen studio to film. This will free us up to take Epic NPC Man to unexplored fantasy lands, improve the D&D cutaways and bring the VFX of all our shows to the next level.

Finally we will be able to bring our beautiful VLDL family together under one roof! For the longest time we have all been working from our own houses and temp work spaces. We will build a state of the art film production office, complete with editing suites, sound suites, VFX rooms, a server for all of our footage and shows, plus a whole lot of desk space and hangout space to film and work in! This will really streamline the VLDL workflow and most importantly will increase the output of shows. We’re so excited at the prospect of bringing our team together and know it will really benefit the quality and quantity of our shows!

The short answer is that this will cost millions of dollars. This is the biggest venture we’ve ever set upon and we’ll be paying this off over many years — this is why we need your help! Kickstarter is only part of the money needed. Viva La Dirt League will be making a massive investment into the studio, sets and shows.

This is the largest and most important investment in VLDL’s history. We believe in Viva La Dirt League more than anything and know with this expansion VLDL has a bright future.

Our goal is to be moved in and filming within a year of receiving the funding. This gives us time to buy a warehouse and renovate it into offices and studio spaces. We will be moving in, soundproofing, building sets and starting the new shows as soon as we can.

Simply put, money is the main thing stopping us from growing as fast as we could. Buying commercial property is expensive! This is why we’re asking you to support us on Kickstarter.

With your help we can take VLDL to the moon!

First up — NO, Byron will not be delivering your rewards. We don’t want another disaster on our hands. We’ve got a new production and distribution partner for this Kickstarter. The wonderful team at Warren James — who do our new merch store will be fulfilling and shipping all your wonderful rewards to you.

There will be additional shipping costs for anyone who receives physical rewards, and instead of charging them on Kickstarter like last time, these will be charged after the Kickstarter is finished by our awesome partners at BackerKit who will be running the post campaign surveys.

This handy little graph below will give you an indication of how much shipping will be wherever you are in the world.

Note: These prices are estimates and hence subject to change

Note: Extra rewards from stretch goals will increase the cost of shipping, usually by a few dollars.

Changing Backer Levels: After the project ends, backers can add-on products to their rewards and change their backer level through the BackerKit pledge manager. Shipping for add-ons will also be organized in the post campaign through BackerKit.