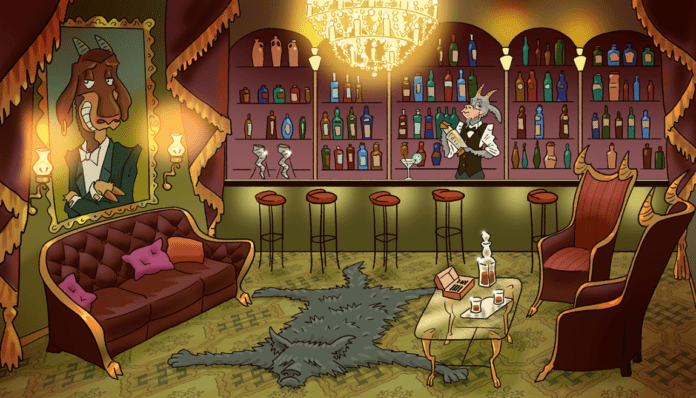 GOATz launched in July 2021 and are the 1st ever deﬂationary PFP NFT that enables owners to customize their NFTS through a process called The Forge. GOATz scarcity is always increasing and the art is always being enhanced. Owning a GOAT will unlock the doors to an amazing community and everything we are developing exclusively for GOATz in the different metaverses like The Sandbox and NFT Worlds.

What is Maison de GOAT?

Maison de GOAT (MDG) describes itself as “a thriving community of dreamers, rebels, and doers”. Certainly, this community-first approach is central to much of the information the team puts out, both on its website and in its Discord.

There are a few really interesting things that Maison de GOAT is doing with its NFTs. Let’s dive into some of these, starting with its main NFT collection.

Maison de GOAT first launched with a collection of 10,000 GOATz NFTs. As you would guess, the art of these PFP avatars is made up of stylized, illustrated goats with various fun traits.

Most important about the GOATz is that MDG calls them the first-ever deflationary PFP NFTs. In essence, this means that the number of available of GOATz NFTs continues to decrease. In addition, GOATz NFTs are customizable, giving holders the chance to update the look of their NFTs.

MDG makes both of these interesting mechanics happen through what it calls “The Forge”.

While Maison De GOAT does host some special events that facilitate the deflationary supply of GOATz, The Forge is the main way that this happens. At present, GOATz holders have burned nearly 3,000 NFTs. Indeed, only 7,173 GOATz NFTs remain.

According to the project’s Discord, The Forge only opens for 4-5 days, every 3-5 weeks. As far as MDG lore, The Forge is located in the basement of the stately Maison.

Another key point about The Forge is that it also allows GOAT holders to customize their NFTs. To explain, holders must send two GOATz to The Forge, but only one GOATz NFT comes out.

Through a token-burning contract, holders get to choose which traits they want their new GOAT to have. Burn mechanisms can be popular among NFT holders because they essentially make their NFTs rarer. Evidently, GOATz might have been one of the first to utilize this feature.

Besides The Forge, there are other ways that GOATz NFTS get burned. For example, there was a one-time event where holders could burn their NFTs to receive an NFT from a new collection – GOATz KIDz.

The KIDz are a collection of cute baby goat NFTs in the same style as the GOATz. The KIDz were first made available to GOATz holders on October 22, 2021, followed up by a public sale on Oct. 29. They are now available to buy on the secondary market on OpenSea.

Notably, the KIDz come with a whole batch of additional utilities. To list, these include exclusive giveaways; legacy challenges for holders of both GOATz and KIDz, and a p2e metaverse, “Adventureland”, that only KIDz can access.

Finally, the KIDz come with a charitable aspect. To that end, 5% of each KIDz mint will be donated to SAVETHECHILDREN.org.

In an attempt to mint out the remaining KIDz NFTs, Maison de GOAT has launched a few fun contests that it calls, “The KIDz Mint Draft”. To sum up, it’s a way for the GOATz community to come together to draft more KIDz while increasing their chance of getting a rare mint, or just one that they prefer.

Unfortunately, MDG faced some challenges over the past week as it prepped for its third edition of The KIDz Mint Draft. As the team detailed in Discord, it suffered a hack on March 21st. A hacker was able to claim unminted KIDz by “passing unclaimed Forged GOAT IDs through the contract directly”. The hacker was able to make off with nearly 300 KIDz NFTs.

Thankfully the GOATz community was able to rally around the team. MDG temporarily halted the minting of KIDz while it was addressing the issue. What’s more, it migrated the 2,998 KIDz NFTs to a brand new smart contract.

While hacks and scams in the NFT space are rampant, the response from Maison de GOAT and the GOATz community is admirable. It will be interesting to watch how The project grows past this incident. Especially the exciting staking and metaverse plan it has in store.